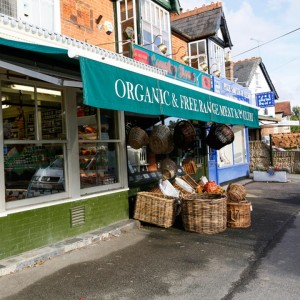 1888: At the turn of the nineteenth century the butcher’s store, a grocer, a laundry and a boot-mender’s shop stood solitary among open fields. These four converted cottages began to find business among the smattering of cottages and new villas springing up in Cookham Dean and Cookham village. Local children played in the dusty road and sang a ditty: “Mr Shackle went to Holland in a Barge to see the King”. Mr Shackle was the laundryman; Mr Holland the grocer; Mr Barge the butcher; and Mr King the boot mender.

From 1988 to 2011 Keith Macey owned the shop and it was known, loved and respected as Macey’s Organic Butchers.

Keith Macey was a butcher for over forty years. He witnessed the downturn in animal welfare and meat quality when he started his business, and felt that these two issues were inextricably linked. On his arrival in rural Cookham in 1988, a century after the founding of the butcher’s shop by Mr Barge, Keith made it his ambition to source his supplies from farms where animal welfare was a first priority and animal feeds were free of nitrates and other unnatural chemicals. He set out to be ‘green’ when green was not only unfashionable but virtually unknown.

Today we understand much more about what we eat but we don’t always have the opportunity to enjoy meats free of additives such as Mr Barge took for granted. Ged Cowdery is carrying on the preservation of the old traditions, and in addition to supplying additive-free organic and free-range meats he has introduced gluten-free and low-sodium products to cater for contemporary market demand.

Ged Cowdery is now celebrating his 5th anniversary at the shop, newly branded Cowdery’s of Cookham, reflecting the essence of his business as family-owned and run. He continues the age-old traditions of the shop, but brings it very much into the 21st century in every regard.

In order to run this site we need to use cookies to store information on you. More info